Navigation Menu
Home » About Us 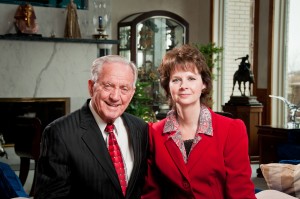 In 1995, Charlie and Laurie Sharpe took a big step of faith in the middle of their Missouri cornfields. Charlie had grown up on what he described as “a little clay knob” in Lewis County. When Charlie’s Ozark National Life Insurance Company started making money, he wanted to do something to make a difference. Eventually, he realized God was asking him to build a place where hurting people could get away from the distractions of life and find help through Jesus.

Charlie never did anything on a small scale. The first piece of ground was turned with a bulldozer instead of a shovel. He was convinced that God would do amazing things at Heartland, and he was right about that.

Shortly before Charlie’s death in 2017, he asked his wife, Laurie, to step in and lead Heartland into the next season. They had worked as a team in the insurance company and the ministry, so the transition seemed obvious to Charlie. Men, women, and children continue to come to this place in the middle of the Missouri cornfields looking for some kind of help and hope. Countless numbers of them have found that help and a new life in God through a relationship with Jesus Christ. And, people keep coming. As they celebrate all through 2020, members of the Heartland community look forward to many more years and many more celebrations of changed lives.

In the Scriptures, Psalm 107 is a perfect picture of Heartland. The psalmist describes people in all kinds of desperate situations. They cried out to the Lord, and He saved them. Not only did He save them, but He guided them to a safe haven—to a city where they could live and raise their families. That city is not just Heartland, of course. It is the Church of the Living God—the true City of Refuge.

Those who make Heartland their home have found a refuge from many kinds of needs in their lives. The psalmist describes us in several categories: Those who wandered in the wilderness, hungry and thirsty, with fainting souls. Those who dwelt in darkness and in the shadow of death. Prisoners in misery and chains because of our rebellion. Those who were fools in their rebellious ways, abhorring even food to eat. Those who went down to the sea in great ships to do business and were caught in terrifying storms.

We all fit somewhere in those descriptions. And we all have this in common—when we called out to God in our distress, He rescued us. It is good to reflect on Psalm 107 and find hope in its words. When we see again what God has done for us, the psalmist tells us what our response should be… Give thanks to the Lord for His loving kindness, and for His wonders to the sons of men!